One of the first games I ever laid my hands on as a child was Rainbird Software’s Carrier Command. It came bundled with our state-of-the-art Atari ST and from the very first time I loaded it up I was hooked. Providing a futuristic naval simulation, it took place in a beautifully rendered 3D environment, in which you commanded a technologically advanced naval carrier in attacks on gorgeous tropical islands. 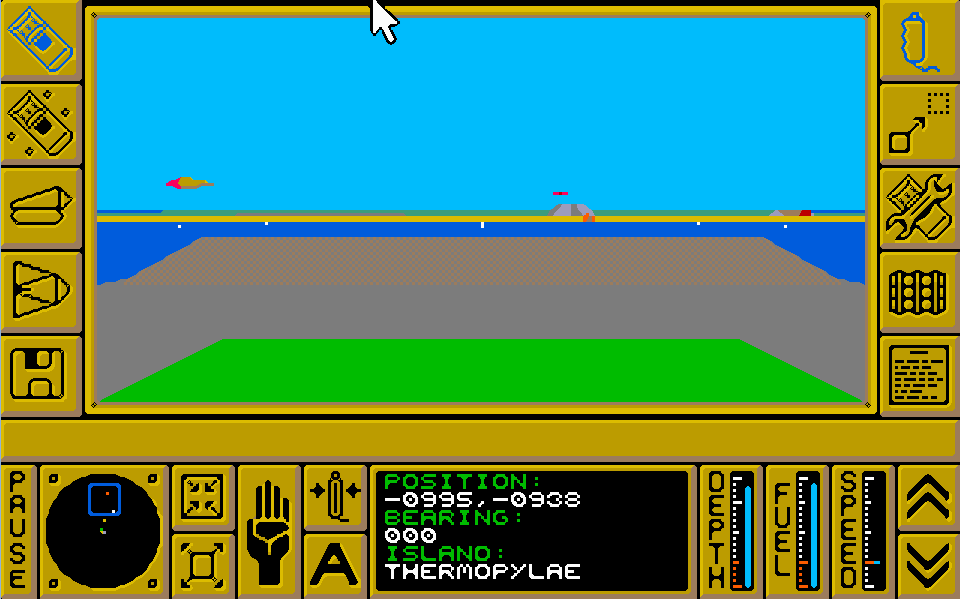 Ok, perhaps my memories of the original’s graphical prowess might be a little out of touch with reality, but despite its dated looks, much of what made Carrier Command unique stands out even today. A fully open world with hundreds of miles of ocean to explore. Customisable units, open-ended objectives and a challenging AI to defeat. It was up to you to craft your plan of attack, and defeat could easily come to the unprepared.

Since then, I’ve waited in hope for someone to step up to the plate. Finally in 2011, Bohemia Interactive, creators of Operation Flashpoint and the ArmA series finally took up the mantle of reconstructing my childhood memories. This week I finally got a chance to have a hands on with a current build of their hard work. No pressure guys, just don’t mess it up.

Carrier Command: Gaea Mission tasks you with taking control of a carrier group securing an island archipelago from enemy forces. In addition to the carriers’ powerful complement of weaponry, your primary equipment is your manta VTOL aircraft and amphibious walrus tanks. Although limited in number, your forces are fully customisable, allowing them to fulfil a number of roles ranging from repair and construction to anti-aircraft defence.

I admit, you can also spot some graphical improvements over the original if you look closely enough.

So that’s how I ended up in this position: Commander of the Gaea Mission carrier. With no military experience to my name nor even the foggiest clue how to operate such a powerful vessel, I set off on my mission to secure the island chain.

Despite its looks, this is not ArmA in a futuristic setting. Gone is the complicated interface and the enormous maps ArmA veterans will be familiar with, Carrier Command provides a far more focussed experience, with a control scheme designed for controller compatability. With such a small number of units at your command, simple tank-rush tactics will soon see your units burning at the bottom of the sea. Instead, Carrier Command rewards careful tactics, where you will see far more success using your units as a scalpel, slicing away at exposed installations and isolated units, rather than charging in with a front-on assault.

The current work-in progress I got to experience only consists of a few islands, but the fundamentals are already in place. A careful reconnaissance of the island precedes a decisive strike by your forces. Firstly, I probed the enemies defences with a pair of Mantas, before charging up the beaches with my amphibious tanks. Once the initial attack succeeds, it’s a slow slog to the command centre at the core of the island, where you can either convert the island to your side, or just blow everything in sight to pieces.

The unit AI, although still quirky at such an early stage of development, is still able to hold its own in combat. You can quite happily hand over one of your mantas to an AI pilot whilst you rescue a walrus from a tricky situation, without risking it flying into the side of a mountain.

Whilst the aircraft can be reliably left alone, the walrus amphibious tanks, on the other hand, are a different matter. No doubt used to designing AI operating on the enormous landscapes of ArmA, Bohemia seem to have struggled to adapt to the cramped enclosures of Carrier Command’s islands, with the nimble walruses (walrii?) frequently running into trees, ditches and buildings galore. No doubt further work will be done on the AI prior to release, but at the moment commanding ground vehicles feels like herding a flock of blind sheep.

With only a limited area available in the beta, it was only a matter of time before I ran into my nemesis. For you are not alone on the high seas of Carrier Command. Your every move is dogged by an enemy carrier lurking just over the horizon, waiting for the perfect moment to strike. And strike it does. Looming out of the fog, it rounded the coast at high speed taking me completely by surprise. With none of the flaws of a human commander, it deployed a full complement of manta and walrus attack craft in perfect unison, charging directly for my ship.

Make no mistake, if you encounter the enemy carrier before you’re ready, you’re toast. One by one our systems went offline, smashed by deadly missile attacks. My few remaining Mantas, scrambled as a last line of defence, disintegrated under withering fire from the superior armed enemy aircraft. In a moment of sheer confusion, I commanded one walrus to attack, one to return to my own carrier, and the other to head off into the distance and provide absolutely no help whatsoever.

So I failed. As my burning carrier sank beneath the waves, I thought about what I could have done differently. I considered my mistakes and started to draw up new plans for my next attempt. There’s still a long way to go before Carrier Command will be ready to set sail, with unit and weapon balancing needing tweaking, along with some care and attention to the walrus AI. The beta has so far shown none of the plot missions, and the on-foot portions of the game have yet to be presented in a playable format, but I’m still intrigued by what I’ve seen.

One thought on “Carrier Command – Hands On Preview”